Got some great books for a few quarters over the weekend at the local library book sale:

Those were for me. For my kid I picked up:

(Though he is welcome to the O'Connor any time)
Posted by Keith at 4:28 AM No comments: 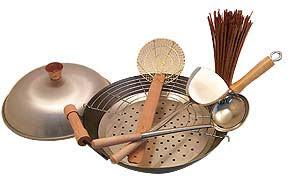 Nummy nummy. I ordered a wok today from Tane. I grabbed this image from their site, and I am pretty sure it is the set she put together for me. We spent about 45 minutes on the phone going over my "situation" and she hooked me up.
Posted by Keith at 1:31 PM No comments:

Rejections, Suggestions, Riddle Me This 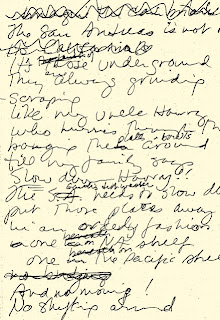 If you have ever had a poem come back with revision suggestions, "change this change that," "we like it but" ... what did you do? I would really like to hear about it. Did you make the changes?
Posted by Keith at 1:25 PM 2 comments:

Those of you who have been to Poor Fool before know that my first son, Rainer, died back in 1998. This June would be Rainer’s 12th birthday and I been thinking lately of all the good things that come in dozens: doughnuts, roses, eggs, days of Christmas, months in a year, hours on a clock. This year I am adding donations to the United Mitochondrial Disease Foundation to that list.

The Wild for a Cure race at the Cleveland Zoo has been changed this year to a walk, so we're all doing it together, minus Otty and Indy. We are asking people this year to donate $12 and then encourage 12 other people to donate $12, because there are two reasons for the foundation: to raise money and to raise awareness. When I tell people Rainer had Leigh’s Disease, they get a puzzled look and tilt their heads. Saying it’s a mitochondrial disease doesn’t clarify it. Mitochondrial problems are more common than we realize. The UMDF website says that up to 4,000 children are born every year with a mitochondrial disease but they are frequently misdiagnosed with atypical cerebral palsy, seizure disorders or diseases of aging instead of mitochondrial diseases. This means that thousands of children are not getting therapies that actually help. Although Rainer was born sick and lived only six weeks, many kids do not show signs of the disease until they are much older and sometimes not until adulthood. Please visit the website and donate $12 and send this on to 12 people and ask them to do the same. It would be great to raise $1,200 this year, but it’s even more important to spread the word:

Keith
Posted by Keith at 5:32 AM No comments: 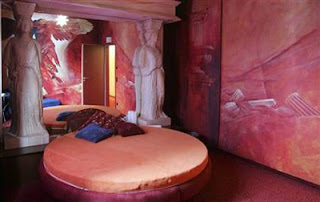 "Lo, and though they all wear them, nothing could prepare the good people of Highland Square for the terror that is THE SHOE CLOSET UNDER THE BED. 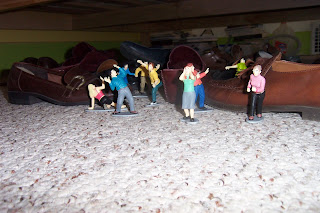 My wife Bianca has two shoe closets. One in the study, and one under our bed. In all fairness, in the WAY back you can see my piles of bedside books.
Posted by Keith at 7:36 AM No comments:

This morning, I came down stairs to find Otty on his back, just waking from his Road Kill dream again. He says he has the dream a lot this time of year, when Spring is approaching and a young dog's thoughts turn to walks. Along streets. Streets with cars on them. Scarrrrrry. 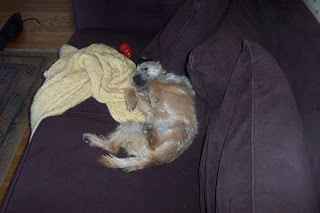 My wife Penelope and me were talking about why Joe Stack's attack on the IRS was not considered a "terrorist attack". The good people at Common Dreams have an article up I thought worth sharing. I can't help but feel in a way, we're getting into Known Knowns and Unknown knowns and other Rumsfeldian bullshit with this defintions dance.
Posted by Keith at 9:34 AM No comments:

My grandmother, Donna Mae Woodruff, died last Thursday. I wanted to put up a post about her. Not just because she was such a big part of my life growing up, but because I sometimes I think it's my love of animals that helped me love at all during certain low points throughout my life and I owe that to her along with a great deal of gratitude. 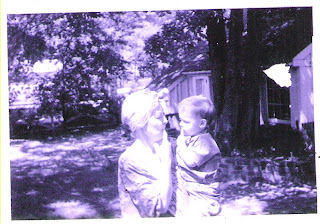 I had always liked animals, but really came to grasp what a great honor it is to earn an animal’s trust, and how rewarding that can be, because of the time I spent with Grandma and Grandpa. My parents divorced when I was 9. A few years after that my father moved back to California and I began to go to my grandparent’s house (this is in Michigan) on weekends to work in my grandpa’s print shop keeping the floors sweep, presses cleaned and garbage emptied—he ran a small printing business on the side. My mother would drive me in Friday and pick me up Sunday. This is when my relationship with Donna really began. Both of them actually, because up until then I had been living in California where I was born.

One of my favorite Cummings poems begins: “if there are any heavens my mother will (all by herself) have one.” The same is true for Donna Mae. It will be a heaven of pony manes to brush, a spider monkey to dress, and a whole bestiary of animals to name, pet, and love. She sadly remarked to me once, on seeing a dog chained up in a yard, “What is the point of having a dog if you can’t feel it against you.” She knew all about feeling dogs against her. At one point she had a whole pack of mini and toy poodles that followed her every move and settled wherever she settled. They were, Shoo Shoo, Bon Bon, Emily, Cupcake, Poppa Touhy, Mister and JePaul. I may be forgetting one. Poppa Touhy had to wear a diaper because he was excitable. That was quite a sight so was seeing all these little gray and white bodies snuggled in around her on the couch where she sat and spent so much of her time reading.


Here are a few highlights. Clyde, the spider monkey, who she occasionally dressed in cowboy chaps and a little cowboy hat--doll clothes. She let him play around in the trees in the backyard and when it was time for him to come in she would offer him a small Styrofoam cup with a sip of whiskey in it—he really liked it. (This Google image looks like him minus the duds.) Over the years, she had doves, Great Danes, a giant Tom cat named Paisano, flemmish giant rabbits that they would turn loose from time to time so they could lope around the backyard like sweet little broncos, sixteen cats that came and went, all with funny names I can’t remember, and even a raccoon at one point that stayed out doors but was a good friend. (Somewhere there are Super 8 movies of me as a little kid playing with it in her backyard.) Some of these animals I was around for, some I heard about through the stories she and Grandpa would tell. They had two ponies as well, Lady Boo and Benny that I remember very well. I sat on their backs as a baby and patted their muzzles as a teenager when I would come there to work. Of course, one of the odd things about all this animal life is that they lived right in the city in a fairly suburban area—wasn’t always that way though. The neighborhood kind of grew up around them over the years until a pony run seemed to look more and more out of place. 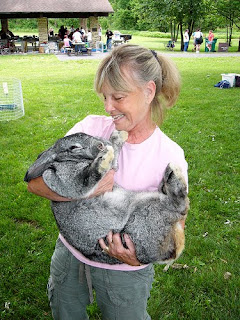 (Another Google image, but imagine 4 or 5 of these running and jumping around the backyard.)

Quite a few years after my Grandfather died, never one to be long without a dog of some kind, she took in a Rottweiler named Alex. She must have been in her 70’s at this point and at one point the dog was horsing around and knocked her over. She broke her hip and could not get up and lie there on the floor where she fell overnight until the next day when my Dad came by and happened to find her. I wrote this poem about her shortly after.

A woodchuck claims the quiet country
that he finds beneath your steps. Now,
his digging makes them tilt so much

that you could fall again. Mice gnaw holes
through boxes of what little food you keep,
build nests of your wig hair and grass

in the cellar’s ancient fuse box. Still
you will not set a trap. Your husband’s dead
and most would say you live alone.

But every day more webs darken the corners
of your ceilings. Every night, the play of squirrels
behind the walls. You remind me of that gentle poet Issa,

writing of lice, flies and fleas with affection
even as his wife sat counting bites
on their infant daughter. I recall your warning

from childhood: kill a spider you’ll make it rain.
Donna, there’s nothing you wouldn’t love,
wouldn’t spare. But how will you survive

when everything you see is so precious—
the tiny, the clawed, living their gentle lives
and aiming them right at you.
Posted by Keith at 10:09 AM 6 comments: 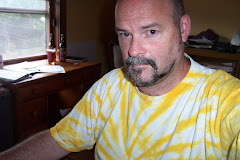 Gallery of Keiths: A Random Grab of Keiths from the Web.

The work that appears here, unless otherwise credited, belongs to me myself and I. Thanks.